I love Dropbox. I’ve used it for years and thanks for various referrals, promotions and codes, I’ve managed to get up my Dropbox up to about 25GB of space, of which I use a large amount  every month. I sync data from apps like 1Password and Transmit.

No one else has managed to make syncing and sharing documents in the cloud as easy as Dropbox, and in the last few months, when they added automatic screenshot uploading and pasting a URL to my clipboard, it became an essential piece of my workflow every day.

Last week, Dropbox revamped their pro plan and is now offering a staggering 1TB of data for $9.99 a month, matching Google’s price.

Besides the extra space, new features include:

With Dropbox Pro, you get an extra layer of control. Set passwords and expirations for shared links, and manage permissions for shared folders. Plus with Pro, you can delete your Dropbox folder from any lost or stolen device.

I love the idea of Dropbox storing a terabyte of data for me, and having access to it anywhere in the world I am.

My biggest question is can I selectively sync what is on each of my devices? My Macbook Pro only has 256GB of SSD storage with an extra 64GB microSD card in a Nifty MiniDrive, and trying to sync any amount of data would quickly fill my drive.

@mrichwalsky Look for Selective Sync Settings in the Account Tab in the Dropbox Preferences.

I checked in the preferences area of Dropbox and you can indeed select what folders are synced to a particular machine. That’s super helpful. Here’s what that screen looks like: 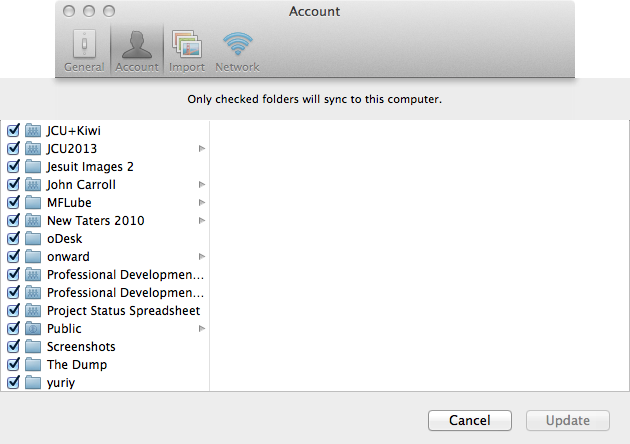 Overall, it’s a bold move by Dropbox to keep up with the big players like Google and Amazon.

Here’s a table I’ve kept with all the big players and their storage plans with the monthly cost associated for each.