If you’re like me, and you may be since you’re reading this post,  you get ideas for apps , websites and services all the time. I know I do. What I am bad at is actually executing these ideas. Sometimes I write a little code, other times I buy a domain name that would fit my idea and then life happens and before you know it I have a bunch of folders, some code and domain names but no real sites to speak of.  I’m trying to break that cycle.

I worked in higher ed from 1998 to 2016. It was both the best and hardest career choice I could have made and it was awesome. I met so many awesome colleagues, team members, friends and more across that time. I left and went to the private sector for two years, but it wasn’t a great fit. At that point, I went full-time on my own at my digital agency, Gas Mark 8.  I kept looking for higher ed roles, interviewed for several (including a few full-day on campus interviews) but nothing went my way. What can you do — it happens.

Over the last 6 years since I left higher ed, I’ve seen so many amazing people leave the industry. It started pre-pandemic, the last 3 years have really been hard on higher education and there’s been a large exodus of talent. There are a lot of reasons for that, and we know many of them (pay, remote work, career advancement, difficult environments, the big sea change in education, and so on.) There has been a very large brain drain, and that’s a bummer.

I’m bummed because I love higher ed and it’s important. I don’t know what the future holds for it, but I believe in what its about. I have one child a year away from finishing college and one a year away from starting. They’re working with amazing faculty and staff and taking advantage of all the opportunities they can. It’s so critical as they get ready to go out into the world.

Back in 2013 or 2014, I created a very quick and dirty job search website that provided links to the HR listing pages of colleges and universities around me in Cleveland, where I live. I was curious about what was out there, and made a simple tool. I shared it with some folks on my team, and added more cities like Erie and Pittsburgh, Pennsylvania. It was just for me mostly, and had very little in terms of design or usability. I did, however, notice that a few schools featured  RSS feeds, and I added a note in my code to someday build out a feature that would grab those job posts and show them on the page without needing another click. The idea nagged at me. I took me 7 or 8 years, but I finally built it.

Before Christmas, I was going through some folders of code and old sites and found the old job site I made. “Finally,” I thought, “there has to be an easy way to build this.” In about 15 minutes, I spun up a WordPress dev site, installed some of the tools we use at Gas Mark 8 and got to work. I started with the last school I worked at (miss you, JCU) — it’s also where my son attends. I threw in their RSS feed and to my surprise, it worked. There were 15 jobs in a custom post type I created. Interesting…

I continued to iterate on features and data structures. The goal in my mind was to build something I didn’t have to babysit. I wanted to add schools to it, import their posts and make sure the data goes to the right place. It started out well. I found more and more schools whose applicant tracking system (ATS) offered RSS or Atom feeds. A decent amount do but the vast majority of them to do not. TMany are closed systems, which is fine, but it stinks to not share that data.

One thing that the plugins we have and the code I’ve written so far doesn’t do (except for a few tests) is scrape pages to get job postings. The ones I’ve tried to scape use the same system so I can re-use my code but many obfuscate their code and don’t let you make requests to data like JSON feeds (looking at you, Workday.) If anyone has written a scraper for any of these ATS sites, let me know.

Once the jobs were coming in, the actual web site  needed a layout, design, UI and most importantly a name. Let me introduce you to CollegeAndUniversity.careers. Have you tried to find a good domain name lately? It’s difficult. 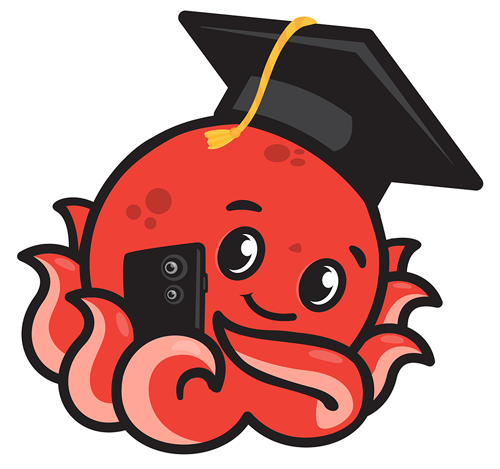 After a few weeks of work and getting some help (thanks, Dylan!), it’s ready for use. I’ve polling about 90 schools and the site now has over 7,700 jobs. It polls schools daily, gets new jobs, edits existing job and deletes jobs that are no longer posted. We’ve created some cool searching ability (by keyword, state or both.) I think it would be cool to allow people to create job search alerts, but that’s down the road. I’ve got a nice feature list going.

We also have a logo. I had one made awhile ago for another app (it’s on the list to build) and we all love it so it’s got a graduation cap now. Why an octopus? It’s got eight legs. Our agency also has an 8 in it. Made sense at the time. I’m thinking of calling it Tako.

The site is built in WordPress and uses Elementor. I did the design in XD and we built it from there. It uses WP All Import Pro to poll all the schools and import the jobs. I wrote some PHP to scrape a few sites that didn’t have feeds. It’s OK but not the best. The site is hosted at Cloudways, where we are a Gold Agency Partner and are big fans. They’ve made our lives much easier.

I’m sharing it here because there are still some folks who subscribe to this blog via email so I hope you’ll open it and visit it. You may still work in higher ed, so I’d love your feedback and ideas on how to make this the best job search tool possible.

If you have a second, would you mind checking it out? Better yet, if you know of someone who is searching for the next stop in their career, please share it with them. We’re adding new schools every day and if just one person finds an amazing opportunity from the site, then all the work and time will have been worth it.

Me? I’m glad to get one of these ideas out of my head and out there into the world.

Thanks and Happy New Year Career!