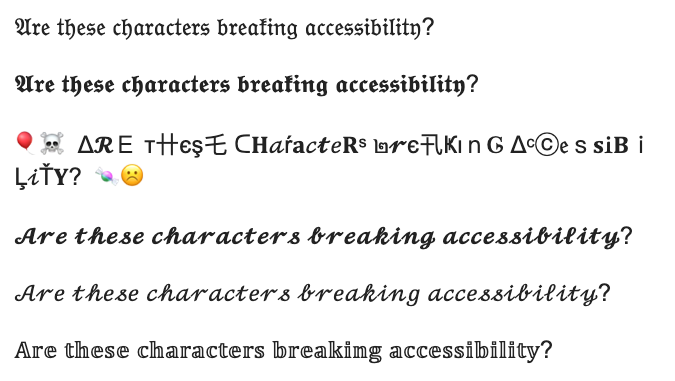 I’ve been seeing a lot of Twitter accounts, both regular user accounts as well as brand accounts, using fancy, math and other symbol fonts in their tweets. These characters are all legal, and part of the Unicode standard. Akin to using a screenshot from a notes app in your tweet, we should take a closer look at these characters.

On one hand, I get it. These characters can make your tweet stand out and breathe some life into your message copy. This comes with a catch though. Those special characters can break accessibility. This includes being able to be read by screen readers and other speech tools.

Here’s an example I’ve seen recently. I want to be clear that I’m not attacking them, just using them as reference. Go Cavs!

Why is this bad?

In that tweet from the Cleveland Cavaliers, you can see the word “fifty” is actually small caps unicode characters. It’s a cool effect, but it can wreak havoc in screen readers.

Why are these characters bad? First, they were designed as mathematical and other symbols, so screen readers either skip them (which happens when I use my Mac’s speech feature) or read out to the user the symbol equivalent. You can see a great example in this video:

What about using Emojis in your tweets? They are fine to use as they have descriptions and when used in a tweet and read by a screenreader, can be described correctly so the user knows what they are.

I don’t have an alternative to suggest. Some people have talked about Twitter supporting Markdown,  which would be nice for formatting but doesn’t address the special Unicode character issue. I also don’t think Twitter will remove Unicode support, as there are legitimate use cases for the characters.

I write all that to say this: think about your audience and if you do in fact need to use these special characters in your tweet. Can you get  by with an image (using Twitter image alt descriptions), emoji or other method? All of those options are better for accessibility than straight up Unicode characters in some cases.