Over the last couple of months, Twitter has rolled out their new polls functionality for users. It’s a great way to engage your audience with quick polls that last 24 hours. In a blog post announcing the launch in October, Twitter said this about polls:

If you want the public’s opinion on anything — what to name your dog, who will win tonight’s game, which election issue people care most about — there’s no better place to get answers than on Twitter. For poll creators, it’s a new way to engage with Twitter’s massive audience and understand exactly what people think. For those participating, it’s a very easy way to make your voice heard.

We’re run a few polls at John Carroll, and they’ve done well in terms of engagement and interest. Todd Sherman at Twitter said this about polls:

From what I’ve seen, polls spur more conversations around the topic than asking the same question without a poll because people reflect on what others think.

Now that we’ve done a few, I have some quick thoughts on them.

There’s a character limit on poll items. I ran into that today with a poll we created. Luckily, my awesome team came up with a great idea – use emojis. I created this poll on Twitter’s browser version, and I was slightly nervous about entering an emoji in the browser and it working correctly in mobile, but it worked just fine. Here’s our poll: 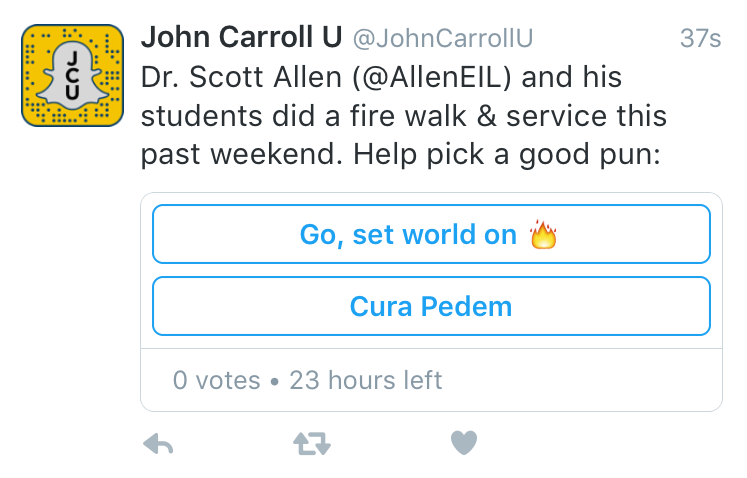 Creating polls is easy from Twitter’s web interface and from the latest versions of their mobile app. I use their desktop Mac OS official app while I’m at work, and I’m surprised you can’t both make them or vote on any polls from their official app. Maybe development has stopped on those apps.  Can other third-party apps vote and create polls? If you use Twitter’s Mac app, you get this, which seems like we just did something wrong:

If you’re logged into the account that created the poll, you can see a running tally of votes which is nice.

I’m not sure if this is a better measurement tool than the “RT and Favorite” type polls people have been doing for several years. Voting in polls may be more scientific, but I don’t know if it gets the same reach as the RT/Fav methodology. One area where polls may work better is that you can have up to 4 choices in a poll, not just two in the RT/fav model. In this model, voting is not made public, as a RT/fav is to all your followers.

Finally, this post from Buffer has an in-depth guide on how to create a poll on both desktop and mobile versions of Twitter.

Quick follow-up: So had a few questions about what “cura pedem” means. Both of the items in our poll are very Jesuit ideas. Saint Ignatius, founder of the Society of Jesus, coined the saying “Go forth, and set the world on fire.” You’ll see many Jesuit schools say this to graduates as they leave their campuses.

Well, there’s a latin term, “Cura personalis,” which is a big part of the idealogoy of the Jesuits and their views when it comes to higher education. It means “care for the whole person.” We often make puns around some of these things, so we came up with “Cura pedem,” which means “Care for the feet.”