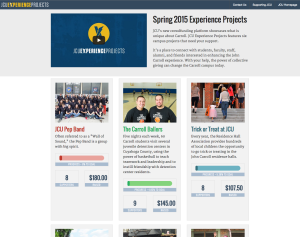 This week, we launched a crowdfunding platform promoting six campus projects from many areas of campus: academics, service, campus experience and more. While there have been many blog posts and webinars about why to do crowdfunding (you’ll reach millennials who don’t give, etc.), I wanted to focus this post on how to build something like this.

We could have used one of the crowdfunding vendor platforms out there, but I’m a glutton for punishment and wanted to instead build it in-house.

First though, the project needed a name. We started out with some variations that played off existing tools like Kickstarter,  but we were nervous about legal action for something that got a little too close to an established brand.  We thought about names that were plays off the name of our mascot, as many campus projects do, but we really wanted this to stand on its own as something that we could build and repeat every semester.

We’ve been using the theme of “the John Carroll experience” on our new student recruitment pieces and as I thought more about it, I liked the idea that the campus groups selected to be part of the launch really touched on many parts of the John Carroll experience – especially in the classroom, the community and around the world, which are core tenets of our Jesuit mission and tradition. Hence, the JCU Experience Projects was born. It took a bit to get used to, and there were a few weird faces when I first threw the idea out there, but I’m really glad it stuck and it’s going to be a great name when we do this again in the fall.

Our designer, Erica Trennel, did a great job with the logo and secondary mark. 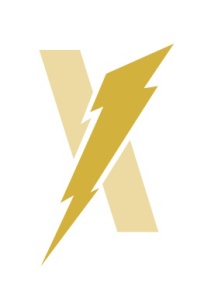 Building the site was pretty straightforward. It’s built using Zurb’s Foundation framework for responsiveness and it’s one of the first sites I designed that was designed as a mobile-first site. Foundation is easy to work with and comes with many features out of the box ready to go so I didn’t have to spend much time writing LESS/CSS or media queries.

I wanted the site to be fully HTTPS, which I’ve accomplished and feel pretty good about. I used Google Fonts and CDNJS for secure hosting of some elements.

Much of the display and page building is done with MySQL and PHP, which isn’t that special. I’ve been using Composer more with my projects, and it makes managing dependencies so easy. For speed-to-market, I used NotORM as a database abstraction layer. It’s so much faster than writing MySQLi PHP code.  NotORM is built on PDO so writing queries is fast and easy. It saves so much time to write queries like this:

The fundraising part is done through existing giving forms built using Wufoo, which we’ve used for years and I’ve blogged about many times here.

One of the things challenges of Wufoo is that since the payment is done by a third-party, such as Authorize.net or Stripe, Wufoo doesn’t know when a user presses submit and leaves Wufoo for Stripe if the form is successfully paid.

Often, a form can be “complete” at Wufoo, but not completed in payment. To remedy that, we have Wufoo sending us some data via a webhook. We store that data in MySQL and every 15 minutes, we poll Wufoo to see if the payment has been successfully completed. Then, and only then, does the gift get marked as complete and the total number of supporters and donation amount is updated. 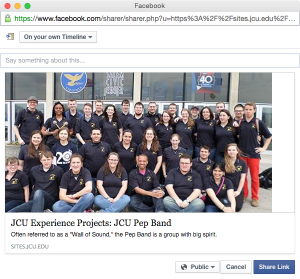 For the sharing, we’re trying something new. We wrote our own simple sharing tools, and did so for a few reasons.

First, I’ve found adding third-party tools to share content can make sites slow. I wanted better control over the look of what is shared so we did it ourselves.

Secondly, I wanted to try a mobile-only sharing tool, in this case, WhatsApp. When USAToday adding WhatsApp as a sharing option last year, they saw shares go up (story). It’s not a platform we’ve used, but I like to try new things. To track shares, we have Google Analytics events tied to each link and medium.

Third, I wanted better control over what was shared, especially making sure something like a hashtag (in our case, #JCUEXP), was included in Twitter shares. That can be harder when using a third-party service.

I coded in Open Graph tags for use in sharing in Twitter and Facebook. Facebook has a great debugging tool for testing your page and tags.

Comments are handled by Disqus. I wanted people to be able to comment but didn’t want to have to write that or heavily moderate it.

For the projects, we shot short testimonial videos featuring students and faculty members. We shot them on campus using our Canon T2i, which while getting a little long in tooth, shoots great 1080p video at 24fps. I’d love a Blackmagic Cinema Camera though.

Don’t laugh, but I edited everything together in iMovie. I have Premiere CC 2014 Pro or whatever it’s called, but sometimes iMovie is just faster at putting simple clips together.

The only thing we outsourced for this project was our introductory video, though we did pick the voice-over artist. Cross and Crown in Chambersburg, PA has done a few videos for us and we’ve been pleased with their work.

We’re a day in, and it’s doing well. We’ve promoted it, especially to younger alums, via social media and email, and the groups featured in this first class of projects are also spreading the word. I hope they all meet their goals and this becomes an ongoing project for years to come.

Want to do a crowdfunding project at your institution? Not sure where to start?  Contact me, I may be able to help.