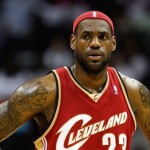 When I arrived at John Carroll in 2010, one of the first major things to happen was LeBron James announcing he was leaving Cleveland, where we’re located, for sunny South Beach. The city was upset. The long nightmare of no championships carried on.

Other than a baseball play-in game, Cleveland didn’t sniff anywhere near a championship. Then something interesting happened.

Cleveland started getting relevant again. The Browns drafted Texas A&M QB Johnny Manzell, and more importantly, LeBron James announced he was coming back to Cleveland. That day, the city was alive with electricity.

We decided to have some fun with it on our University social media accounts that afternoon as well as promote some of our expert faculty members who were being interviewed by local media about LeBron’s return to Cleveland.

I’m fortunate that I have a team that is super nimble and could create these media items just an hour or so after the announcement – we were in line at Chipotle when the news broke. We ate first, then got to work.

Much like the effect of the announcement of Pope Francis had on our institution, I hope the renaissance of Cleveland continues.