A few weeks ago, we had a power outage on our campus that lasted a few days. Luckily, our dorms were quickly brought back online, leaving only our student center offline for a few days.

This was troublesome in that all our student activities, athletic events, cafeterias and more were in that building. My team and I were quickly pulled in to help communicate the updates out to the campus community.  Our outreach included Twitter, an alert bar on all JCU web pages and our text alert system.

Students especially seemed to react most positively to the tweets. We were answering questions, posting updates and even offering treats to hungry students (who happily took us up on the offer.) The responses were fair, fun and engaging.

The reactions to our text messages were much different. I don’t know if people know that when the institution sends a text alert, and you reply, someone usually reads them. The messages back ranged from “I’m not a student here” to words I can’t even post here. Just general vitriol and anger.

Once the crisis was over, and power restored, I had a bit of fun on Twitter.

Did you know if you text back to JCU Alert, we can read those? Some of you are angry and say mean things. #sadface pic.twitter.com/XmTleIdrfQ

As you can see, that tweet had a ton of retweets, favorites and replies. Some were funny, some where upset. But I think the tone changed once they saw it was a real person on the other side of the Twitter, and not the faceless “institution.” Once we said we were just the messenger to one particular person who asked if we got their foul response, they sent back this. Made me feel a little better: Our Center for Service and Social Action office was also very nice, saying:

@JohnCarrollU, you are doing a fantastic job of keeping us all up to date. Thank you!

Once the power was back on, life quickly went back to normal, for students and for us in the communications team.

Imagine my surprise, as I was on vacation in England and Wales a week after the outage, to read our student newspaper online edition. I was interested to see how they’d cover the blackout.

The story was fair an accurate, focusing on how the blackout affected students and especially our campus radio station, which was right in the middle of its yearly fundraising drive. As I paged through the PDF version from my hotel in Cardiff, I was stunned by what I found next.

An editorial by the paper. About our text alerts. 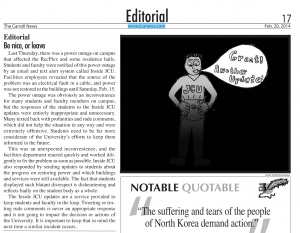 Since the editorial isn’t online for me to link to, I hope they don’t mind me copying it here.

Be nice, or leave

Last Thursday, there was a power outage on campus that affected the RecPlex and some residence halls. Students and faculty were notified of this power outage by an email and text alert system called Inside JCU. Facilities employees revealed that the source of the problem was an electrical fault in a cable, and power was not restored to the buildings until Saturday, Feb. 15.

The power outage was obviously an inconvenience for many students and faculty members on campus, but the responses of the students to the Inside JCU updates were entirely inappropriate and unnecessary. Many texted back with profanities and rude comments, which did not help the situation in any way and were extremely offensive. Students need to be far more considerate of the University’s efforts to keep them informed in the future.

This was an unexpected inconvenience, and the facilities department reacted quickly and worked diligently to fix the problem as soon as possible. Inside JCU also responded by sending updates to students about the progress on restoring power and which buildings and services were still available. The fact that students displayed such blatant disrespect is disheartening and reflects badly on the student body as a whole.

The Inside JCU updates are a service provided to keep students and faculty in the loop. Tweeting or tes-ting rude comments is never an appropriate response and is not going to impact the decision or actions of the University. It is important to keep that in mind the next time a similar incident occurs.

Wow. All that from a few tweets. As I sat across the ocean, I smiled.

I think we as an institution have reached a tipping point, especially on social media, and we’ve established a voice on Twitter for John Carroll and that students know a real person who works here at the institution manages, listens and responds.

While we haven’t had to use the text system yet, I think people will be much more polite to us. I, for one, am pretty excited.