As I was going through my account last week, it was suggested that I may like a user named @mrichwalsky4. Interesting, I thought. Not counting my Dad, who doesn’t use Twitter, there are one or two other Mike Richwalskys in the world. Maybe one of them had joined Twitter. I thought I’d check out what they had to see. 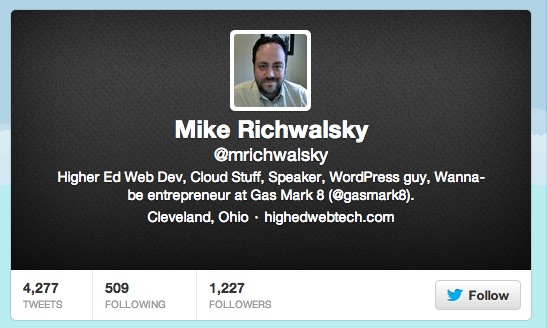 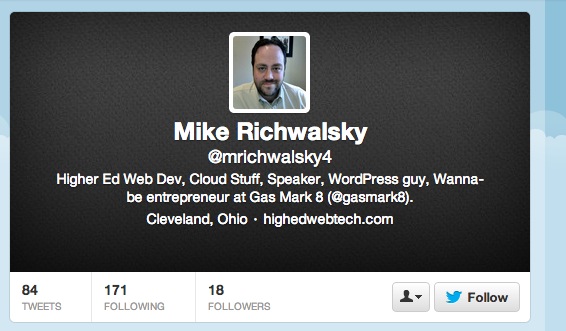 Ok, that’s more than a passing resemblance. That’s me. My profile pic. My bio. My URL.

So many questions starting going through my mind. Who did this? Why? It felt strange to have your online identity stolen and used without your permission. This wasn’t even a parody account, it was downright theft.

After checking with some friends and colleagues and them saying no, they hadn’t created it. I started to panic.

The tweets from this account were strange, as well. Here are a few gems from the account.

First off, I don’t have a brother. Second, my mom is the worst banana opener ever. Folks on Twitter helped me keep calm:

@mrichwalsky This is awesome. I’m reading all his tweets in your voice right now.

My next stop was the help section of Twitter.com. I found this information about reporting a false account or an account that impersonates a person or brand. Here’s what they had to say:

When reporting impersonation of an individual or brand on Twitter, you will need to provide the following:

I needed to complete a help ticket, and send Twitter a copy of my ID to prove that I’m me, and the only me, on Twitter. So I started the process. On November 4, 2013, I completed the online form and officially reported the fake account to Twitter. A ticket was opened and a copy of my Ohio driver’s license was faxed to a random fax number in California.

I waited. And waited. The ticket said it was opened and awaiting review by Twitter. Honestly, I thought with their impending IPO, people would be a little distracted at Twitter. I’d certainly be.

Four days later, I got this response from Twitter, which didn’t exactly make me feel confident in the system:

We apologize for the inconvenience, but we experienced technical difficulties with our ticketing system during the time in which you filed a request for assistance.

If you’re still experiencing an issue, please reply to this email with your original message, and we’ll do our best to help.

Again, we are very sorry for any trouble this may have caused. 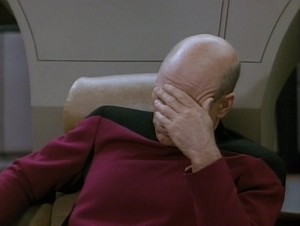 What’s strange is that it was sent through the same system as the ticket, and was appended to the ticket. So someone at Twitter opened this ticket, didn’t read (lol) and asked me for my info.

I did what they should have done, and copied the information from the ticket and re-posted it to the same ticket.

After that, radio silence.

Thank you for providing this information. We have removed the reported profile from the site due to violation of our Terms of Service.

Over the last few days, as I waited for word from Twitter, I did some digging into the tweets this user was sending, to see if I could figure out who was doing this.

When I googled one of the tweets posted on the fake account, I found similar results and dozens of fake accounts, all registered with the same information, photos and bios, but with a character added to the username. Here are a few examples:

@SW_Women is an organization in the UK that offers encouragement, inspiration, support, friendship, alongside information from business speakers for women in regional enterprise. They are followed by 105 people and have tweeted 79 times.

@SW_Women_ has the same bio and avatar, but is not the same organization. It has 6 followers and follows 194 people. And there, just like on the fake account of mine, is the tweet “Ima become a professional bowler”

@CitizenPaper is the Twitter account for the Webster County-Citizen, a newspaper in Seymour, Missouri. They have 41 followers and haven’t tweeted since May 12, 2013.

@CitizenPaperU is another fake account with 9 followers and a bunch of retweets. If we look back a few weeks, we find the same tweet as one in my fake account, this time about mothers opening bananas.

I’m going to hazard a guess that this is a singular person who has found some popular accounts in the US and UK, created fakes to capitize on a mistype or Google result, and retweeted and tweeted mostly nonsense. I don’t know why this person would do it, but it seems I’m the only one who’s figured it out and had their fake account taken down.