Like many people, I saw the Phonebloks videos come out of nowhere and generate a bit of interest with their idea of a modular, reusable phone. It’s an interesting idea – but what struck me about their site and videos is that they weren’t asking users to join a Kickstarter campaign to raise money, but instead to join their “Thunderclap,” a service that allows users to give a tweet, Facebook post or Tumblr post. Everyone that joins that Thunderclap will all tweet the same, pre-written message at the same time.

It’s a great idea – instead of pushing out each update over weeks or even months that could easily be lost in the social streams, everyone posts at the same time, amplifying the message and hopefully creating more mass awareness for your cause, program, project and so on. From the Thunderclap website:

Thunderclap allows you to develop strategic campaigns that not only reach your audience, but also create real impact by being in control of your message and timing. The platform also offers comprehensive analytics that allow brand managers to see which social networks their fans are on, and how they’re sharing the message. 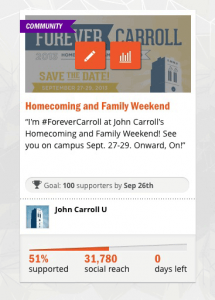 I saw the Phonebloks campaign and got inspired to create a Thunderclap project for my University. This past weekend was our big Homecoming weekend, so 2 weeks ago we started a campaign to promote Homecoming.

Setting Up The Thunderclap

We set a low goal of 100 people pledging a tweet or other social media message, as I felt that was a goal we could reach, and everything above that would be gravy. The challenge with Thunderclap is that if you don’t reach your goal, you’re out of luck and no message will get sent.

Time to spread the word

We started with our core social media outlets, Facebook and Twitter. Initial posts on these sites got us a decent amount of interest, with a few dozen people signing up. One of the nice things about the Thunderclap service is that after a user signs up to give their tweet, they’re also given the opportunity to share that they’ve joined the campaign. Some nice social currency for us.

After a few days of static numbers, I brought out the big guns. I spent a few bucks to promote the program on Facebook to our alums and set up a promoted tweet to reach more users. I also promoted the Thunderclap to both our students and our administration using our daily news email newsletter.

Again the number stagnated, hovering about 40 out of the 100 we needed.

Over the last few days, we tweeted the link to the many campus organizations and Twitter accounts to help spread the word. The majority of them retweeted our message, which was fine, but hardly any of them signed up to join the Thunderclap.

Last Thursday came and went, and having not reached our goal, our message was not sent.

I’m disappointed we didn’t reach out goal. Mostly because we missed out on the opportunity to reach over 30,000 people with our Homecoming message. As I’ve reflected on the process, I had a few thoughts on how to make future campaigns like this a success.

We tried to explain the Thunderclap concept to people, and many got it, but perhaps the message wasn’t getting through. I’m not sure how to best explain this in the future.

I would have liked an embeddable widget, like you see above, to include on several of our University pages, including our Homecoming site. Thunderclap offers no option to get a widget like that, which is something I hope they improve on in the future.

I’d also like it if Thunderclap offered me more detailed stats on who supported us, so we can thank them. By default, we are shown the top 4 people with the most supporters and the last few supporters, but that’s it, unless we join their premium service at a cost of $500 per campaign. That’s no big deal for large brands, but tough for institutions and smaller organizations on a per campaign basis.

I still like the idea of everyone tweeting or sharing at once, we just missed this time.

7 thoughts on “My Thunderclap was a fizzle”