With Facebook’s recent updates to its Edgerank algorithm, you may have noticed that the posts you make on your fan page are reaching fewer and fewer people. I’ve certainly noticed it, and it’s frustrating to know that we’re only reaching a small percentage of our total fans.

So why did Facebook make this change? Will Cathcart, Facebook’s product manager for news feed told TechCrunch:

“We made a relatively large ranking change in September that was designed to reduce spam complaints from users. We used [spam] reports at an aggregate level to find Pages or apps generating a lot of reports [and decrease their reach]. We’ve also added personalized attempts to reduce presence of posts you’re likely to complain about.”

Do I believe the changes were made to cut spam? Not 100%. Were they made to raise money for Facebook, which now has shareholders who want a return on their investment ($FB). I’m sure that played into it. The problem for page admins is that our content is not reaching everyone that “liked” us, even though they explicitly chose to “like” us, we didn’t add them without permission. Richard Metzger at Dangerous Minds goes into great detail about this switch here, saying:

But it wasn’t just the so-called “fan pages,” individual Facebook users were also starting to notice that they weren’t seeing much in their newsfeeds anymore from the various entities they “liked”—or even updates from their closest friends and family members. Something was amiss, but unless you had a larger “data set” to look at—or a formerly thriving online business that was now getting creamed—it probably wasn’t something that you noticed or paid that much attention to.

I’ve seen this handled different ways, including this way which I found via Matt Klawitter. 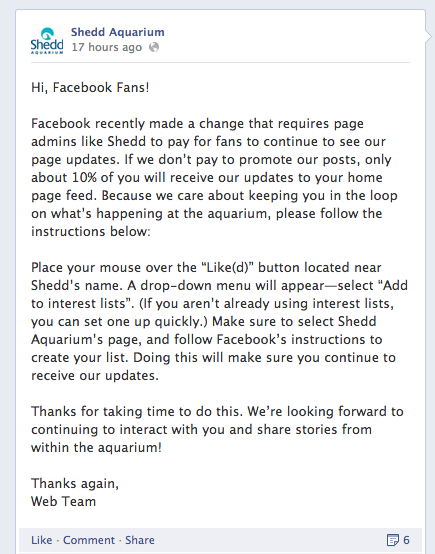 That’s one way to do it, but that’s putting a lot of responsibility on the user to not only find what you’re talking about, but actually completing the task correctly.

The other option is to pony up and use the promoted posts functionality. This isn’t a big deal for the huge brands out there, but for colleges and universities, it’s a challenge. I certainly don’t have the budget to spend $40 per post to reach everyone who has indicated they’re a fan of my university. That bill would quickly run into the thousands of dollars a month just to try to reach some of our audience – the same audience who said they want to get our updated when the liked the page.

I wonder if there’s a middle road for Facebook to take with small and medium size fan pages – namely a subscription model. If I could be guaranteed a certain amount of reach per post, I could easily make the ROI case internally and get budget for that. I think a price like $99 would be very attractive to many page owners, IHE’s included.

Will Facebook do it? Probably not, but give it a few earnings reports and maybe the tune will change.

2 thoughts on “What would you pay Facebook to reach all your fans?”