We as higher ed web people have many choices when it comes to embedding videos on our sites. More and more, we’re turning to YouTube to host these videos for us.

For the most part, I’m fine with that. We don’t have to worry about bandwidth and storage, we get decent analytics and get the added bonus of YouTube users stumbling across our videos.

That being said, I’m seeing a trend lately that’s been bothering me – and it’s one that can potentially make our institutions look bad.

People – when you’re embedding a video from YouTube, for the love of crackers turn off “Show related videos.” It’s a simple checkbox. It looks like this:

Checking that box can save you quite a bit of embarrassment. Case in point:

Georgetown University is about to launch a major capital campaign. It’s an amazing video – it’s beautifully shot, beautifully edited and is just really compelling. Here it is:

I guarantee you that video was not cheap to produce. I was watching it on their campaign site, where it was embedded, and was really engrossed in it. I was good until it ended and the YouTube player showed me related videos that it thought was relevant to the launch of Georgetown’s capital campaign. Front and center: one showing off the fact that rapper Wiz Khalifa spends $10,000 a month on weed. 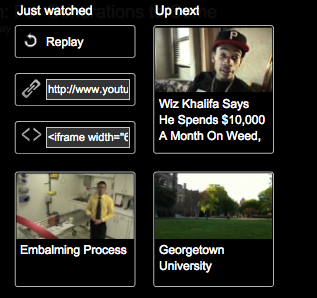 I can pretty surely say that Georgetown doesn’t want to promote Wiz Khalifa’s drug habit. I’m sure it doesn’t fit in with their mission (the embalming process video that also shows up is a bit creepy too.) I’m sure they don’t want people to leave their campaign site and videos confused why they’re linking to drug videos.

For something that’s critical to a university, such as a campaign video, I would probably host the video on my own, or use JW Player to grab it from YouTube directly.

If you can’t do that, and have to use a YouTube embed, you really should turn off the related videos. Don’t play poker with your career.

Update: Looks like it was oversight and is on its way to being fixed.