We’ve used UStream here a number of times to stream both live events as well as sporting games. As I wrote about in this blog post, Ustream’s an easy and free way to stream content live.

The challenge with setting up for Ustream is that it required a video camera, laptop and internet connection. I’ve been watching anxiously over the last year for a way to do it easily on a mobile device. I think that day has finally come – which is especially important to those of us who, thanks to lame contracts, haven’t been able to affordably upgrade to an iPhone 3GS.

You could stream on UStream for a few months now using a jailbroken iPhone, that is, an iPhone that’s used software to get into your phone to allow applications unapproved by Apple to run. I didn’t really want to do that, so I waited and waited. 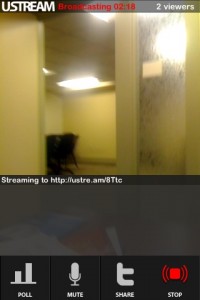 Once I saw the announcement go up, I installed the app and got streaming in just a few minutes.

First impressions: the app is really nice. It’s easy to use and the quality coming from my 3G phone is really nice. I walked around our offices (using wifi) and when holding the camera still, video and audio was crisp and clear.

There are optional settings to have UStream post a tweet on your behalf when you start a new live stream. That’s nice – there’s no sense in doing a live stream if no one is going to watch it.

One interesting feature is that you can record videos in the app off-line and save them in Ustream, in both private and public modes. This could be a cool feature – I can imagine taking my iPhone out for a quick interview, recording it in offline mode, saving it to Ustream and have users view it when they want.

So far, I’m very impressed with this app. I think it’s something we’ll be using more and more of. Now, all we need are a few iPod touches with cameras and this could be a pretty decent streaming arsenal on campus.