You know what I really like about this new web 2.0, cloud, distributed era we’re living in? As a web developer, it means there are some times that I can stop writing custom apps that I have to support for years after their initial launch and hand off the duties to someone that can do it better than I can. In this case, Google.

In addition to my regular job, other job, side work, speaking, parenting and more, I’m one of the faculty advisers at our campus radio station, WARC 90.3 FM. It’s fun – I get to hang out with students and listen to tons of great music.

For as long as I’ve been here, student DJs would record every song they played on a sheet of paper and leave it in a box at the end of their show. As a station, we report what’s being played to places like CMJ – it helps them track what’s popular and what’s being played at colleges around the county. Labels also like to know what types of music we’re playing so they can send us new stuff to check out.

Collating all that paper and trying to figure out what was being played was a giant pain. It took quite a bit of time and effort, and we realized there had to be a better way.

So, a few years ago, I cobbled together a quick web app that allowed DJs to record their show’s playlists on a computer that lived in the studio. It worked pretty well for DJs, but it was still a bit of a pain for the people charting.

There was no easy way to enter in that week’s new releases. There wasn’t easy ways to count or organize playlists and tracks. Most of that is my fault – I didn’t have the time to really create a great app.

This year, we’re fixing that. We’re letting Google do all the heavy lifting. Since we transitioned our students and staff to Google Mail and Apps this summer, all our students have easy access to Google Spreadsheets. I created a quick form, that looks like this: 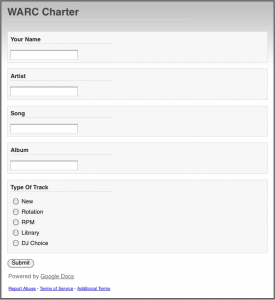 It’s set as the homepage of the studio computer and for DJs, the process really hasn’t changed that much. For the music director, his life has become much easier. Google Spreadsheets let you quick organize, parse and get out data quickly into many different formats. We can have multiple people getting in and working with the data. So far this semester, it’s been great. Here’s a look at the backend: 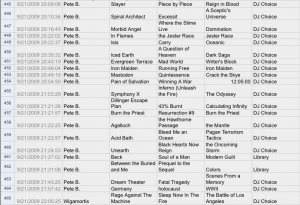 So far so good. I’m happy with it, our DJ’s are happy and our general manager and music director are happy. Wins all around.