Well, to be fair, Glenn Beck and Lou Dobbs melted one of my web servers yesterday. 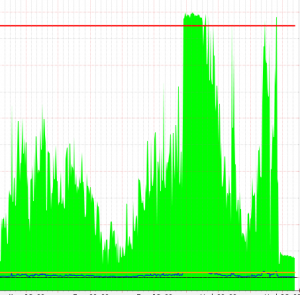 That red line up there, that’s us pretty much saturating a 100MB connection for the better part of a day. My first thought was “man, that’s going to be expensive.”

Our college is partnering with the Story of Stuff project to host some web video – they serve a large number of videos to people and schools around the world. We merely host the flash video files on a dedicated box with its own bandwidth connection.

But Mike, you say, why aren’t you doing this in Amazon S3. Good question – that was my first thought when we were first approached about this project. With S3, we wouldn’t have to worry about pipes and bursting and all that, we just pay for the traffic but the cost estimates were too expensive for the budget we had for this project. It’s definitely still on the radar.

Sometimes yesterday, radio and TV host Glenn Beck talked about the project on his website here as well as his TV and radio show, and traffic went through the roof. That evening, Lou Dobbs at CNN also talked about it. Those two sent a ton of people over to the project to watch the videos (that we serve.) The system held up pretty well, and apart from some sluggishness late last evening, it’s been pretty good.

So, I’ve spent a large part of today ordering more bandwidth for that server and looking at some Apache modules to help shape the bandwidth. I’ve become pretty handy with mod_bw today. We hadn’t thought a ton about how to handle giant spikes, so the new things I’m trying out today will help us find a good, stable platform to ensure everyone gets to see the content quickly and for us, not too expensively.

If you have any tips or suggestions, let me know.