I came across this link in Will Richardson‘s twitter stream this morning about Twitter usage by teenagers. 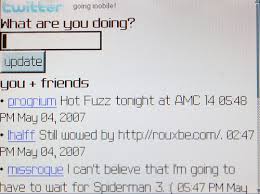 According to a 15-year-old intern at Morgan Stanley, Matthew Robson, teenagers eschew Twitter, don’t read newspapers and want ad-free music from online tools like Pandora, Slacker and Last.fm. From the story:

“Teenagers do not use Twitter,” he pronounced. Updating the micro-blogging service from mobile phones costs valuable credit, he wrote, and “they realise that no one is viewing their profile, so their tweets are pointless”.

I think we’ve all known that Facebook is getting more use than Twitter in this age group, though I suppose its good to hear it from someone in that demo.

Have you seen Twitter usage among teenagers increasing or staying the same at your institution?